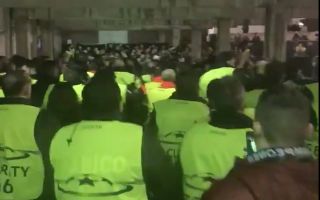 Chelsea crashed out of the Champions League on Wednesday night after defeat to Barcelona, but there were also reports of trouble off the pitch to make it a less than pleasant trip for supporters.

After a 1-1 draw in the first leg at Stamford Bridge, the Blues made key defensive mistakes and fell to a 3-0 loss at the Nou Camp with Lionel Messi leading the charge for the Catalan giants.

SEE MORE: Photo: Alvaro Morata could be in trouble after being caught making obscene gesture at Barcelona fans

In truth, Chelsea will be frustrated as they gave a good account of themselves, but they weren’t able to capitalise on dangerous moments in the final third, struck the woodwork twice and weren’t perfect defensively which was needed in such a game.

Nevertheless, supporters had further problems off the pitch, as noted in the tweets below, as it was claimed that many clashed with police in Barcelona before the game outside the stadium.

In turn, Chelsea have now launched an appeal to any supporters involved in the problems to come forward and provide further information so that they can investigate the matter further.

It remains to be seen whether or not anything comes of it, but it sounds like a pretty unpleasant experience for some of these fans, who will now hope that action is taken for what they perceived to be completely unnecessary action from the police.

[2/2] ‘We ask that our supporters contact us with accounts of their experiences of this evening’s arrival at the stadium so that we can take this up properly with the authorities.’

Absolutely disgusting from the Barcelona stewards and police , kids and elderly men and woman getting beaten to the ground for no reason . pic.twitter.com/8mZphOvKO3

Shocking treatment, walked 30 minutes away from the ground and then pushed around when reserved seats were taken. Missed the first 20 minutes despite arriving at the ground 1 hour before the game pic.twitter.com/tI65c21Xtq

Guys getting batoned by the police as they left at 3-0 was a surprise to see. Haven’t seen that since we played Atletico. #spanishpolice

Coming out of the ground before the bridge there was a sudden surge. People pushed to the floor and as I turned around all I saw was Spanish police randomly pushing and hitting people. Carnage afterwards. Happy to give more info.

Chelsea fans have been treated like animals getting into the Camp Nou tonight. Delayed so we missed kick off and hit with batons when we did. Crazy/scary scenes. This has to be sorted out. Away fans don’t have one problem when they come to England. Not one.

Message for @FCBarcelona , when your fans come to our ground we show them the utmost respect. What you are doing to us @ChelseaFC fans is not right. Made us walk so far just to get in, then the police are treating us like animals inside.Pushing us & not allowing us to wait. #CFC

Barcelona police pepper spraying and charging at Chelsea fans with bats after the game. Yet it will get no attention because it’s always the English who cause trouble ?