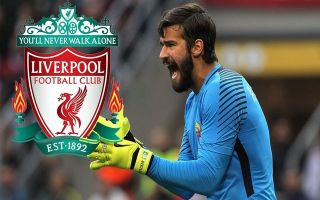 Liverpool have been heavily linked with Roma goalkeeper Alisson in recent months, but his agent may have dealt a blow to their potential transfer plans.

The Reds have faced plenty of questions over the goalkeeping situation at Anfield, with Loris Karius and Simon Mignolet rotated and both have previously been guilty of high-profile and costly errors.

It appears as though the German shot-stopper has won that particular battle though having emerged as the top choice in recent months with eight consecutive starts in the Premier League.

Meanwhile, The Liverpool Echo noted this week that Jurgen Klopp may well have even been convinced to stick with him rather than see the club bring in Alisson as a replacement.

As per that report the Brazilian international is said to be valued at £80m by Roma, and so perhaps Karius emerging as a reliable figure between the posts has come at the perfect time as that’s a lot of money for a goalkeeper which could be better spent elsewhere on the squad.

While Liverpool have improved significantly in defence more recently, conceding just five goals in their last eight games in all competitions, it has ultimately been their biggest weakness this season having conceded 34 goals in 30 Premier League games.

That gives them the worst defensive record of the top five sides and by some distance, with leaders Manchester City conceding just 20 goals in that same number of outings.

However, with Karius impressing, this latest development over Alisson seemingly won’t be such a big blow to Liverpool, as his agent, Ze Maria Neis, appears to have dropped a hint that they could be securing their future with Roma.

In truth, it’s quite an ambiguous Instagram post, as he doesn’t flat-out say that they’re speaking to the club about a long future together.

Nevertheless, the caption reads: “Growing partnership! Taking care of the interests of our athlete Alisson Becker here in Rome!”

That in turn would seemingly suggest that they want to agree on new terms with Roma, with the 25-year-old playing a crucial role in their success this season with a string of impressive saves and stand-out performances.

In turn, Klopp will be hoping Karius can continue as he is with a reported target now potentially off the table…