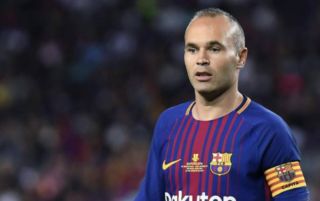 CaughtOffside recently learned that Jose Mourinho had requested the signing of Verratti this summer, while the Independent have claimed the club could consider a swap deal involving Paul Pogba in order to bring him to Old Trafford.

However, they’re not the only ones chasing the classy Italian midfield playmaker, with Don Balon claiming Barcelona are keen on him as an option if they lose Iniesta in that role.

The report suggests there is the growing feeling at the Nou Camp that this will be Iniesta’s final season with the club and he’ll certainly need a big name to come in and fill those boots.

The Spaniard has been one of the finest players in Barca’s history and Verratti looks one of the most ideally suited to the club’s style of play in that all-important creative role.

Marco Verratti could leave PSG for Manchester United or Barcelona

The 25-year-old has shone for PSG and is not a player they’d want to lose, though Don Balon also recently reported he could be open to moving on to fulfil his true potential.

PSG still look some way off competing with the best in Europe for the Champions League, and Verratti may well see Barcelona as the perfect stage for him to showcase his talents and challenge for more major honours.