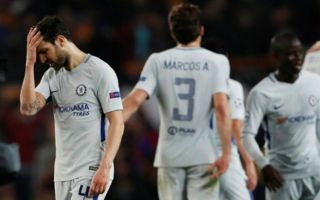 The Belgium international was far from at his best for both Lionel Messi goals on the night, particularly as the first one – a fairly tame effort by Messi’s standards – went between his legs from a wide angle.

According to Don Balon, this has led Real Madrid to cool their interest in signing Courtois as their next number one goalkeeper, with United shot-stopper David de Gea remaining their top priority target to replace Keylor Navas.

Courtois is undoubtedly one of the best ‘keepers in Europe on his day, but he let himself down last night and it may well have cost him a dream move to the Bernabeu.

The 25-year-old has publicly admitted his heart is in Madrid due to his family being based there, and he’s yet to sign a new contract despite his current deal being due to expire at the end of next season.

Don Balon recently claimed Courtois had contacted Real about a transfer to the Spanish capital, but it looks like De Gea is now the player they’re going to focus on.

This would be a huge worry for United, with De Gea proving one of their most important players once again this season, as he has done consistently since he joined back in 2011.