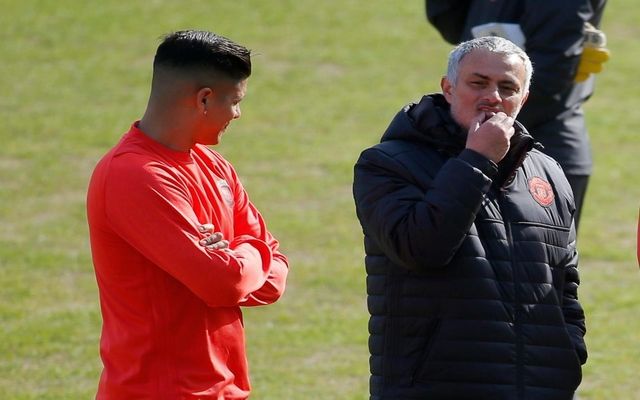 Man Utd defender Marcos Rojo has put pen to paper on a new contract with the Red Devils which will keep him at Old Trafford until 2021.

The 27-year-old joined United from Sporting in 2014, and has gone on to make 105 appearances for the club, winning an FA Cup, League Cup and the Europa League during his time in Manchester.

Injuries have been a problem this season as he’s been limited to just 10 appearances in all competitions, but that hasn’t stopped Man Utd from securing his future as they official announced his new deal on Friday afternoon, as seen in the tweet below.

“Since I joined Manchester United, it has been everything I thought it would be and more. I am extremely happy to extend my stay at this great club,” he told the club’s official site.

Competition is fierce in that part of the squad, as Man Utd have Eric Bailly, Chris Smalling and Phil Jones also competing for a place in the starting line-up too.

In turn, Rojo will have to prove his fitness and consistency again when he eventually returns from injury in order to break back into Mourinho’s side, but based on the Portuguese tactician’s comments below, he’s delighted to have the Argentine continue his career at Old Trafford.

“Marcos has gone from strength to strength over the past couple of seasons, and has always shown great professionalism. He is always ready to put his body on the line for this club and I am delighted he has signed a new contract.”

Whether it’s as a squad player doing his part or as a regular starter, there is certainly plenty of sense in keeping Rojo on the books for United as he’s a no-nonsense defender who has proven to be valuable to them.

Nevertheless, it remains to be seen what the preferred backline pairing will be, as it’s arguably in Mourinho’s best interests and those of Man Utd to settle on a consistent backline to ensure things are kept tight in defence.

We are delighted to announce that Marcos Rojo has extended his contract with #MUFC until June 2021, with the option to extend for a further year.