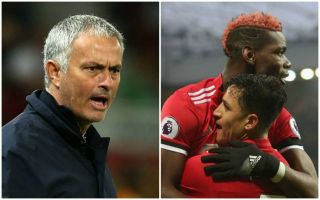 It hasn’t been a positive few days for Man Utd, and all the negatives in their campaign have come to the fore following their Champions League elimination.

The Red Devils went from the highs of beating Liverpool and taking a big step towards a top-four finish in the Premier League to then losing to Sevilla and seeing their European hopes ended.

Many have been criticised from boss Jose Mourinho to several individuals in his squad, but former Arsenal midfielder and French international Emmanuel Petit has singled out Paul Pogba in his assessment of the situation at Old Trafford.

Aside from falling short of expectations in recent months in terms of his form, Pogba has been the centre of significant speculation both suggesting that he has issues with Mourinho and linking him with an exit from Man Utd.

Petit has a simple message for him.

“Paul, I’ll give him a little bit of advice — change attitude a bit,” Petit said, as per ESPN.

“He should stop making it a Mourinho-Pogba duel, because the club of Manchester United is much more important than those two guys. Right now, he’s making it personal and you can clearly see that on the pitch as he is sending out a lot of negative signals.

“It gets tiresome when you’re sulking permanently.”

Whether Pogba should be blamed for the situation or if both are culpable will be up for debate, but for now, Petit wants to see the right reaction from his compatriot to ensure that both he and Man Utd can be successful moving forward.

It remains to be seen if it plays out that way, or if we could indeed see one go if United continue to struggle in their bid to win major honours.