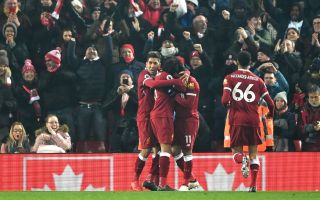 Liverpool thrashed Watford 5-0 this afternoon with Mohamed Salah in inspired form to hit four and make history for his club.

The Egypt international was simply unplayable on the day, and also picked up the assist for Roberto Firmino’s goal in the second half.

MORE: Mohamed Salah has just done something no Liverpool player has ever done before

As ever, here’s the good, the bad, and the weird as Salah inspired Liverpool to a hugely impressive Premier League victory…

Where else can you start other than Mohamed Salah? Some say he’s the Egyptian Messi, others increasingly believe Messi is in fact the Argentinian Salah.

The 25-year-old may have hit four for the day, but he’d already made a small piece of Liverpool history when he netted his first two.

34 – Salah has now scored more goals than any other Liverpool player in their debut season at the club. Historic. https://t.co/5fxjDuxLwr

After making it 2-0, Salah was on 34 goals in all competitions this season – overtaking Fernando Torres for the most scored by a player in their debut season for the Reds.

And he still managed another two.

And it’s still only March.

Okay, instead of ‘the bad’ today we’re going to have to find more room for Liverpool brilliance, because right now they’re playing like a team who could well be European champions in the making.

Jurgen Klopp has this group of players crushing opponents almost on a weekly basis, with their fast and relentless passing, pressing and goal-scoring too much for most defences – Manchester City will not be happy with that Champions League draw that’s for sure.

Our pick of the ‘very good’ is this picture of Roberto Firmino scoring his goal – he may have been overshadowed by Salah today, and indeed most of the season, but the audacity of this strike shows just how much he’s improved under the expert management of the toothy German in the Anfield dugout.

Not only is Salah ridiculously good at football, he’s also spookily possessed by the spirit of Lionel Messi, and here’s the proof.

Click here to watch his first goal today alongside Messi’s classic against Bayern Munich back in 2015 and tell us we’re not seeing a player who’s being inhabited by the Barcelona superstar.

Seems we’re not the only ones who think so…

Salah’s goal is an exact copy of that Messi goal vs Bayern Munich. #LIVWAT pic.twitter.com/OESHPULjtx