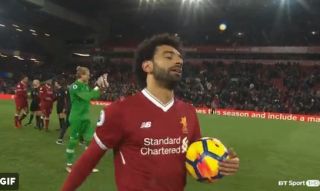 The Egypt international was just unstoppable today as he hit his first hat-trick for Liverpool with an impressive four goals and one assist against Watford in a 5-0 win.

Surely the signing of the season and a strong contender now to win both the Golden Boot and PFA Player of the Year, Salah also showed he’s a classy guy when the whistle’s blown.

Together with his match ball, the 25-year-old went over to Watford ‘keeper Karnezis to give him a hug and offer his apologies for giving him such a nightmare of an afternoon at Anfield.

Mo Salah APOLOGISED to the Watford keeper after sticking four past him.

The nicest guy in football ? pic.twitter.com/YaHAjGgTEi

That’s according to BT Sport, anyway, who tweeted this GIF of the Reds ace seeming to apologise for his outrageous form this afternoon.

It may be slightly inconclusive, but it certainly seems fair that Salah should say sorry for tormenting his opponents.