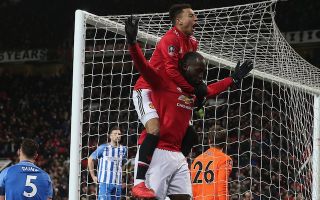 Man United had been under heavy criticism following mid-week embarrassment at the hands of La Liga side Sevilla in the Champions League.

The Red Devils hosted Brighton in today’s FA Cup quarter-final with their season hanging in the balance with the competition now the only real hope of any silverwear for Mourinho’s men this season.

Romelu Lukaku and Nemanja Matic provided the goods for Manchester United with both stars scoring in each half.

Romelu Lukaku is really starting to look the business in that red shirt. The Belgian has been the subject of some heavy criticism after finding some rather inconsistent form for the Red Devils since moving from Everton. However, Big Rom is starting to deliver the goods on a refreshingly regular basis for Jose Mourinho despite United’s lack of consistent quality as a team.

Below illustrates how the Belgian has established himself as a regular goalscorer, and perhaps more importantly – a goal creator, in recent weeks.

5 – Romelu Lukaku has either scored or assisted in each of his last five appearances for Man Utd. Leading.

We need to talk about Alexis Sanchez, seriously. The Chilean forward was snubbed by Mourinho for the first time since moving from Arsenal after being left on the bench for this evening’s cup tie. And, guess what? Perhaps, he should stay there.

United had far more shape both going forward and defending as a team without Sanchez marauding around the pitch demanding the ball to his feet at pretty much every unfeasible moment. Juan Mata provides much more natural positioning in a wide position and Anthony Martial has pace in his legs that Sanchez probably hasn’t seen since his Barcelona days acting as a little brother to Lionel Messi.

Sanchez dropped to the bench. Deserved on current form

Sergio Romero. The Argentine hero that United neither really deserve or even knew they had. Romero is quite possibly the most talented second choice goalkeeper in the Premier League. So much so that he’s one of the very few goalkeepers in the league that could even think about pushing David De Gea for United’s number one shirt.

Romero produced one of the saves of the season in the second half and should perhaps be given far more game time by Mourinho moving forward.

What are your thoughts on the game? Did United look better without Sanchez? Should Romero be given more praise? Let us know in the comments section below.