Real Madrid and Brazil midfielder Casemiro has urged PSG forward Neymar to secure a move back to Spain with Zinedine Zidane’s side.

This is according to the Sun, who are re-reporting from Spanish news outlet El Partidazo, who state that the Los Blancos ace wants the Spanish side to move for the 26-year-old.

Speaking about Neymar, Casemiro stated “With the quality that he has, I would sign him for sure. I hope he comes this season. He is a great player, one of the top three in the world. He can do whatever he wants off the pitch if he continues to do what he does on it.” 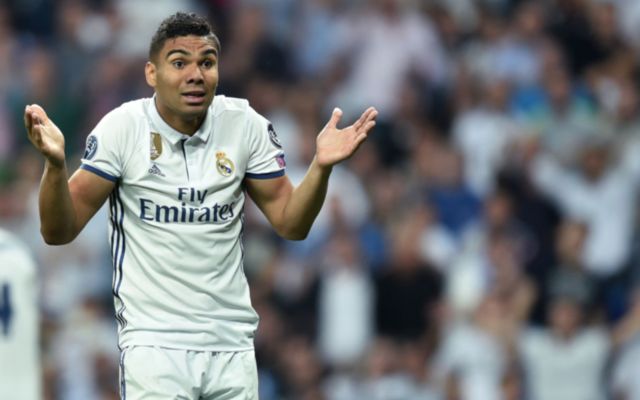 Since moving to PSG, Neymar has been in fine form for the French giants since his move from the Catalan giants in the summer.

In 30 appearances for the Paris-based side, the Brazilian international has managed to bag an insanely impressive 29 goals and 19 assists, a streak of form that even Lionel Messi and Cristiano Ronaldo would be proud of.

During his time in Spain, Neymar impressed nearly everyone with his insane ability. For Barca, the winger was able to clock up 105 goals and 80 assists in 186 appearances, a great return.

It isn’t surprising to see Casemiro urging Los Blancos to go for Neymar, as the midfielder should know all about the forward’s quality, as he has played with his a number of times for the Selecao and against him in La Liga during his time for Barcelona.

If Neymar does move to Madrid, it’ll surely be a transfer that will shock the world, and be one of the most surprising of all time.