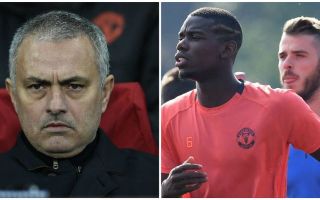 It’s been an up-and-down campaign for Man Utd this season, with Jose Mourinho coming under fire while doubts continue to emerge over key players.

The Portuguese tactician was heavily criticised by pundits and supporters alike after his side’s Champions League exit to Sevilla in midweek, while he was less than impressed with his players despite their win over Brighton in the FA Cup this weekend, as noted by BBC Sport.

One player who has had a difficult run of it in recent months is Paul Pogba, as the French international has struggled to hit top form as he has just three goals and 10 assists in 27 appearances in all competitions.

Injuries and suspensions haven’t helped his bid for consistency, but neither have Mourinho’s tactics which leave Pogba exposed to criticism at times while the 25-year-old has to take responsibility too as he should undoubtedly be capable of showing more versatility and quality to do a job for his side regardless of his role and the system in which he plays.

As per Sky Sports, Man Utd splashed out a then world record fee of £89m on Pogba to take him back to Old Trafford in 2016, but now it’s reported that he could be on the path to leaving Manchester for a second time.

According to The Mirror, his agent, Mino Raiola, has been putting the feelers out by looking at possible destinations for his client and that is surely only going to irk Mourinho and the United hierarchy further if accurate.

The report adds that Raiola has already set up a tense relationship with the club over his wage demands for Pogba and ideas on where he should be played in the side, and this latest claim is undoubtedly not going to go down well with the club.

It’s worth noting that the Mirror add the Pogba doesn’t share the desire to move on, but if a prestigious and financially lucrative offer were to result from Raiola’s reported enquiries, it remains to be seen if the former Juventus star would stay at Old Trafford amid the current troubles.

For whatever reason, something isn’t working for Pogba at Man Utd as we’re not seeing the best of him. Time will tell how much patience all parties concerned have to see him come good before a big decision is potentially made.