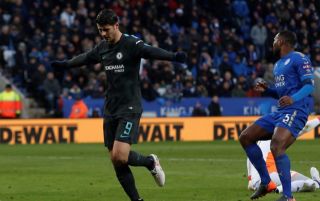 Alvaro Morata scored his first goal of 2018 this evening as he helped Antonio Conte’s Chelsea book their place in the semi-finals of the FA Cup with a win over Leicester City at the King Power Stadium.

The Blues weren’t in the best of places following their recent form, with a midweek thrashing at the hands of Barcelona in the Champions League not doing the west London side any favours heading into today’s match.

Antonio Conte’s side went into today’s tie knowing that the FA Cup is the only competition left which they have a chance of winning, something that would’ve surely spurred the Blues onto victory today.

Spanish duo Morata and Pedro both scored as the reigning Premier League champions booked their place at Wembley with a 2-1 win over the Foxes.

Alvaro Morata put in a very solid display today, with the former Real Madrid forward scoring his first goal in 13 appearances in all competitions in the first half as he put the away side one goal to the good.

Some fans have been questioning whether Morata is up the task of playing in England, however today showed that even when he is seriously out of form, the Spanish international can still be relied on to deliver the good when it matters.

Morata would’e really needed his goal today, with this tweet showing just how out of form the Spaniard was going into today’s match

13 – Alvaro Morata has scored his first goal for Chelsea since December 2017 (v Brighton), ending a run of 13 games in all competitions without one. Required. pic.twitter.com/5zhe098iQ1

Belgian Thibaut Courtois was dropped by manager Antonio Conte today, with the former Atletico Madrid star not even being given a place on the substitute’s bench for his side’s match today.

This is most likely down to the fact that the shot-stopper played very poorly against Barcelona on Wednesday, with Courtois being at fault for two of the three goals that the Blaugrana bagged that night.

It’s clear to most that Willy Caballero is a better shot-stopper than the Belgian, and following his actions today, it’s starting to look as if even Conte himself is beginning to realise this!

We could have been in higher position in the league If we had Caballero instead of Courtois in goal and that is a fact.

N’Golo Kante played absolutely fantastically today, with the former Leicester star coming on against his former side for fellow Frenchman Tiemoue Bakayoko, who himself had an absolute shocker of a first half.

The second half and the whole of extra time really showed that Kante really is one of the Blues’ most important players, with the away side looking like a completely different beast whenever he’s on the pitch in comparison to when he’s not.

It wouldn’t surprise many to see Bakayoko take a seat on the sidelines for the rest of the season so Kante can get the game time he needs to help the Blues qualify for next season’s Champions League and, potentially, win the FA Cup.