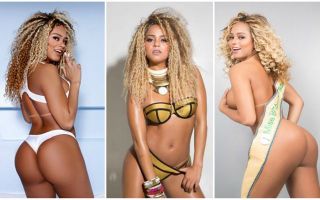 Cristiano Ronaldo might be in hot water both legally and with partner Georgina Rodriguez amid reports Erika Canela is set to sue him.

According to The Daily Mail, the Brazilian model has claimed that after an alleged affair between the pair, she went through a stressful ordeal of dealing with the blowback, not only from the public, but also from Ronaldo himself too.

She claims that she was harassed and insulted by the Portuguese international after the rumours were covered in the media, although it’s noted importantly that it’s not clear if the messages were in fact from Ronaldo.

Now the report adds that her legal team could be set to launch proceedings against the Real Madrid superstar as they seek damages for what she’s had to go through.

It remains to be seen whether or not she’s successful, but it comes after details were leaked of their alleged fling last year after she shot to fame having won the Miss BumBum competition in 2016 and has since appeared in reality TV shows and much more.

Having welcomed another baby to the family last year with Rodriguez, Ronaldo could find himself in trouble at home if this controversy continues to blow up.

As for Rodriguez though, she looked absolutely stunning in this snap that she shared on Instagram earlier this week showing that she’s wasted no time in getting back into shape after giving birth to the pair’s daughter Alana Martina last year.