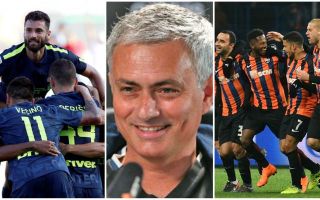 Jose Mourinho could oversee major changes at Man Utd this summer, with Romelu Lukaku dropping a big hint over arrivals ahead of next season.

The Red Devils are still in the hunt for the FA Cup to ensure that they don’t end the campaign empty-handed, while they’ll be desperate to secure a top-four finish in the Premier League and book their place in the Champions League next season.

For a club of their prestige, size and with their expectations though, they’ve fallen below the standards demanded at Old Trafford and it could lead to changes this summer.

According to The Daily Mail, not only has Lukaku suggested that new faces will definitely arrive this summer, as seen in the quote below, but the report goes on to add that Man Utd could bankroll a £155m splurge to sign Blaise Matuidi, Fred and Ivan Perisic.

‘We are Manchester United, we have to improve every year and I know that a lot of players, a lot of good players, will come in next summer. That’s for sure,” Lukaku said.

With that kind of spending in mind though, coupled with the big-money signings of Lukaku and Paul Pogba in previous transfer windows, Mourinho will surely have to be told that the club need to balance the books too.

In turn, Luke Shaw, Matteo Darmian, Chris Smalling, Juan Mata, Daley Blind and Anthony Martial are all specifically mentioned as players who could be sacrificed.

That’s a significant amount of change if accurate, as ultimately Mourinho would be axing depth and quality to bring in three players potentially capable of being pillars of his side moving forward.

Between them, Matiudi, Fred and Perisic would address key areas of the squad and would bring plenty of experience and class to the team.

With Michael Carrick retiring and Marouane Fellaini yet to sign a new contract, the midfield may need to be the first department to be looked at, so Matuidi and Fred would be sensible additions while they could also allow Pogba to have more freedom in the attacking third.

As for Perisic, he offers more guarantees than the likes of Marcus Rashford, Jesse Lingard and Martial, as he has proven it over a number of years for club and country.

The 29-year-old has scored seven goals and provided six assists in 28 appearances so far this season, and beyond the numbers, all three rumoured targets would offer something else key to Mourinho, which is work ethic.

The trio work tirelessly on the pitch and have shown versatility, so perhaps this could be exactly what Man Utd need heading into next season if they are to be successful and win major trophies under Mourinho.