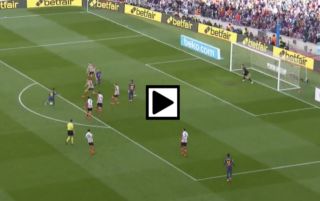 Barcelona superstar Lionel Messi scored a stunning outside-of-the-box strike against Athletic Bilbao to put the Spanish giants 2-0 up against Ernesto Valverde’s former side.

The La Liga leaders are taking on the side Valverde managed last season at the Nou Camp this season, and Messi added to his goal tally for the season with a superb long-range effort to put the Blaugrana firmly in the driving seat.

MORE: Lionel Messi in difference of opinion with senior Barcelona teammate over key position in XI

The strike was the Argentine’s 35th goal of the season, with 25 of these coming in the league, meaning that his is now four goals ahead of Barca teammate Luis Suarez and seven ahead of fierce rival Cristiano Ronaldo in the race for the Pichichi trophy.

Barcelona went into the match with the Basque side eight points ahead of second place Atletico Madrid, with Messi’s goal surely setting them on their way to an 11-point lead over Los Rojiblancos.

Here’s a clip of Messi’s fine goal against Bilbao for Valverde’s side this afternoon. Feast your eyes on that!