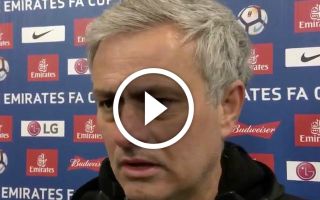 Despite Man Utd’s win over Brighton to advance in the FA Cup on Saturday night, Jose Mourinho still wasn’t happy with what he saw from his players.

The Red Devils needed a big response after losing to Sevilla in the Champions League in midweek, ending their run in Europe for this season.

While they did so in terms of the result with a 2-0 win over Brighton to book their spot in the last four of the FA Cup, Mourinho was still far from happy with the attitude and performance from his team, and surprisingly opted to single out players in his post-match interview, as seen below.

It’s not the first time that the Portuguese tactician has done this, and again, it raises the debate over whether speaking and criticising certain players publicly or in fact the whole team is going to get the reaction that he wants.

Nevertheless, the entire side were in the firing line to begin with, only for Mourinho to then start focusing on individuals while reserving special praise for Nemanja Matic who was seemingly the only player to come away with a positive assessment.

“I’m not happy. There was a lack of personality, a lack of class, and a lack of desire,” he began on BT Sport, as seen below, and reported by The Guardian.

“You have the kid [Scott McTominay] that didn’t play well at all. I told him already, he was the first one I spoke to individually in the dressing room. And instead of being critical with him, I was positive with him saying: ‘You played very bad but you did the basic things that one player has to do’.

“Luke [Shaw], in the first half, every time they came in his corridor, the cross came in and a dangerous situation was coming. I was not happy with his performance.

The point that Mourinho was essentially trying to get across was that he didn’t see enough courage and quality from his players in the game to take control and show the confidence needed to dominate it.

Given that result in midweek, it would surely have knocked everyone’s confidence significantly. Perhaps having got back to winning ways now, it will be the boost needed at Old Trafford to ensure that they enjoy a successful end to the campaign in the coming weeks.