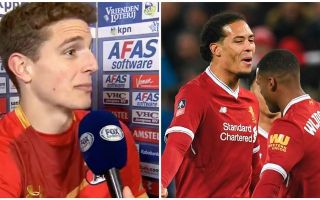 It’s not that often that you hear a young player be so open and frank about the club that he supports, but that’s what Liverpool fan Guus Til has done.

Speaking in an interview with Fox Sports, as seen in the video below, the 20-year-old was discussing his call-up with the Netherlands national team and it’s fair to say that he’s looking forward to linking up with two players in particular.

The youngster will be training alongside Virgil van Dijk and Georginio Wijnaldum after both Reds players got the call-up too, and Til couldn’t hide his delight that he’d be working with the Liverpool pair.

“I’m going to train with Van Dijk and Wijnaldum… I’m a big Liverpool fan and now I’m going to play with them! It’s definitely something I’m looking forward to,” he noted.

Having come through the youth ranks at AZ Alkmaar, he’s now made 39 appearances for the senior side in total, scoring six goals in 23 outings this season from midfield.

It appears as though he may well have ambitions of playing for his beloved Liverpool at some stage in his career, but first it remains to be seen if Van Dijk and Wijnaldum will be impressed with what they see and whether or not they take a shirt for the youngster, as hinted at in the tweet below.