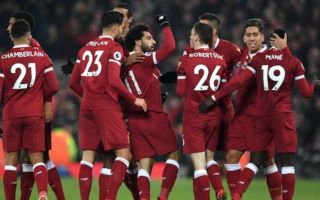 Liverpool star Mohamed Salah will reportedly be rewarded for his tremendous form this season with a new and improved contract at Anfield.

This development comes as the free-scoring Egypt international attracts growing talk of interest from the likes of Real Madrid and Barcelona as his reputation and value soar.

MORE: ‘If I was Liverpool I’d be really worried’ – LFC warned about future of star attacker

Salah is currently the Premier League’s top scorer on 28 goals, four ahead of nearest rival Harry Kane, and has weighed in with a total of 36 in 40 appearances in all competitions.

No one could have quite expected this from the 25-year-old after his summer switch from Roma, but he’s been an absolute revelation in the Premier League and it’s little surprise to see elite clubs linked with an interest.

The Sun claim Real, Barca and PSG are among those looking at Salah, who could cost as much as £200million after his blistering start to life at Anfield.

However, Bleacher Report’s Dean Jones claims the player is set to be rewarded with a new deal and that there’s no chance he’d be sold at this point after making such a great impression.

Mo Salah will be rewarded with an improved deal at Liverpool—no way he leaves just yet. Can he ever repeat this season’s form though?