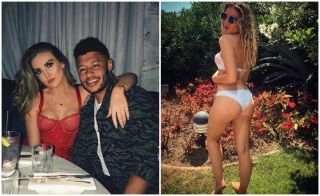 Liverpool’s Alex Oxlade-Chamberlain had a great time last night as he indulged in some mini golf in a night club.

The England international was out on a date with gorgeous girlfriend Perrie Edwards, and couldn’t resist cheekily filming one of her attempted shots.

As the Ox’s video below shows, golf can brings about the potential for people to take up some interesting positions, with Edwards bending over delightfully for her naughty boyfriend to get a great shot on his phone, which he uploaded to snapchat along with a ‘peachy’ emoji.

Oxlade-Chamberlain has been in fine form since swapping Arsenal for Liverpool last summer and has fully earned a night out with his stunning WAG.

We’re not sure she’ll take too kindly to sneaky videos like this, though, so he’ll have to be careful if he wants another golfing date again in the future!

Ox and Edwards have been together for some time now and their Instagram pages are full of attractive photos of them together.

Happy new year from us! Mr Professional over here went off to bed ahead of his game tomorrow… the OJ musta been too much! Me however… on the champs celebrating a great year! 🍾🥂 What a year you were 2017! 2018 I'm ready for ya! 😍