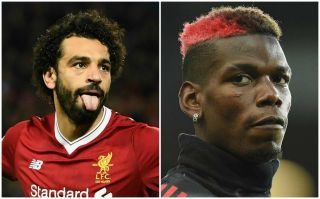 Liverpool forward Mohamed Salah has taken yet another dig at Manchester United, more specifically at Paul Pogba on this occasion.

The Egypt international has made quite an impression in the Premier League this season, and also seems eager to build a reputation for himself among the Anfield faithful.

Salah recently had a difficult game against United as he found himself unable to get past Ashley Young as the Reds lost 2-1 in their Premier League meeting at Old Trafford.

Still, he’s clearly enjoying his football in England and took particular joy as Liverpool got further than United in the Champions League, tweeting this just after the Red Devils’ recent defeat to Sevilla:

The 25-year-old’s cheeky dig was retweeted around 41,000 times by fans who clearly loved the subtle swipe at rivals United, and he’s now done it again with a thinly-veiled attack on Pogba.

The France international has not been at his best lately and takes a lot of flak for his hairstyles and flamboyant social media persona, with Salah having this to say about his approach to football:

‘I don’t have tattoos, I don’t change hairstyles, I don’t know how to dance. I just want to play football,’ he said.

Mohamed Salah: “I don’t have tattoos, I don’t change hairstyles, I don’t know how to dance. I just want to play football.” pic.twitter.com/pcLegTrDkS

It seems pretty clear who he’s talking about given all the hype around Pogba at the moment, and he seems to be loving watching the struggle as much as any Liverpool fan.