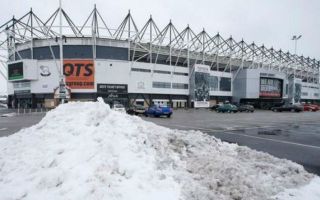 Derby vs Cardiff was postponed on Sunday morning due to heavy snowfall overnight as a result of the ‘mini Beast from the East’.

The Pride Park club said that the game between the two Championship sides, who are chasing promotion to the Premier League, was called off due to the surrounding areas at the stadium being “in an unsafe condition for supporters, staff and officials”.

See more: When are the FA Cup semi-final dates for Manchester United vs Tottenham and Chelsea vs Southampton?

However, the fixture with Cardiff has been re-arranged for Tuesday, April 24.

Cardiff manager, Neil Warnock, was unhappy with the decision to call the game off as his team and fans had travelled to Pride Park safely and called handling of the affair “scandalous” and a “disgrace”.

However, the EFL said in a statement the decision was made “first thing this morning following discussions between Derby County, Derbyshire Police and the local Safety Advisory Group.”

The #Bluebirds will travel to Pride Park on Tuesday, 24th April for a 7.45pm kick-off.

A Derby statement said: “The match was originally due to be played on Sunday, March 18 but was postponed due to safety reasons as a result of severe weather conditions. It has been agreed that the game will be played on Tuesday, April 24 (7:45pm kick-off).

“Tickets purchased for the original fixture remain valid for home and away supporters.”

A statement on the Cardiff website said: “As part of ongoing discussions with the EFL regarding the postponement of Sunday’s fixture at Derby County FC, we can confirm that a rearranged date for the game has been agreed to our satisfaction.

“The Bluebirds will travel to Pride Park on Tuesday, 24 April for a 7.45pm kick-off. Further information regarding ticketing will follow in due course.”