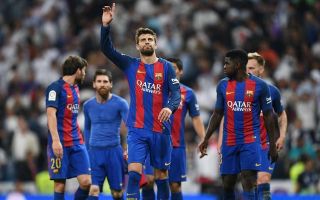 Fierce rivals on the pitch, full of banter off it it seems. Barcelona defender Gerard Pique has revealed that he’s in a WhatsApp group with some of his teammates and Real Madrid players.

The two giants of Spanish football are often locked in battle for major trophies each season, with the Catalan outfit on course to take La Liga honours this year as they enjoy a healthy 11-point lead with nine games to go.

Coupled with a Copa del Rey final date and Champions League progression, it could yet be a very successful campaign for Ernesto Valverde and his men.

So much so that Pique has revealed that the banter has been flying back and forth between Barcelona and Real Madrid players in a WhatsApp group which was initially used for the Spanish players from either side to keep in touch while not on international duty.

Naturally, putting those strong personalities into the same group was only going to lead to it becoming something completely different from its initial intention, and Pique has now admitted as much.

“I’m going to let you in on a little inside information,” Pique told The Players’ Tribune. “I started a special group for some of the guys on the Spanish national team who play for Real Madrid and Barcelona.

“All we do in that group is talk s*** to one another about Barca and Real. It’s the best. We’re just like little kids. And the truth is, it’s especially hilarious for me right now, because now we’re up 15 points on Real in the league.

“I’m texting them in the WhatsApp group, ‘Come on guys, why so serious?!’ Then I put a little crying emoji, and a laughing emoji.”

It’s pretty funny to be fair and just goes to show that while there is an obvious and deep rivalry between the two clubs while it can be very intense when they square off, there is a camaraderie there still between the Spaniards and they’re able to poke fun at one another too.

While it looks as though Pique and Barcelona will have the last laugh this season domestically, Madrid can’t be written off in Europe having won three of the last four Champions League finals and they’ll be hoping to have an excuse to fire back at Pique if they are forced to see their rivals sweep up in Spain.