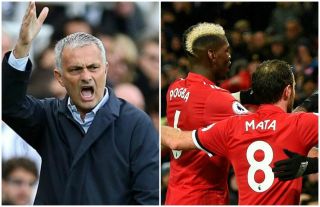 Despite seemingly still having key roles to play at Man Utd, reports claim that Juan Mata and Ander Herrera will be allowed to leave if they desire.

Given the number of appearances between them, it doesn’t seem to make too much sense as they both offer important options in the squad for quality and depth.

Mata has made 35 appearances so far this season, scoring three goals and providing six assists, while Herrera has featured 30 times and coupled with the fact that Michael Carrick will retire at the end of the season and Maraoune Fellaini hasn’t yet signed a contract renewal, Man Utd could be left desperately short in midfield if Herrera was to leave too.

According to Marca, while United and Jose Mourinho won’t actively shop the Spanish pair, if either or both were to decide that they would prefer to move on this summer, then the Red Devils won’t stand in their way.

While it will be a source of real disappointment for some to see them both go, it does arguably hint at an exciting rebuild of sort at Old Trafford this summer if Mourinho is willing to offload a few players who will undoubtedly need to be replaced.

With Mata battling for playing time alongside the likes of Jesse Lingard, Anthony Martial and Marcus Rashford, an exit for him would appear to make sense. Whether Herrera follows him out of the exit door remains to be seen.

Given the quality that the pair possess though, it’s highly unlikely that they won’t have plenty of options on the table as with Mata still aged 29 and Herrera, 28, they still have a lot left to offer at the highest level if they choose to move on from Man Utd at the end of the season.