Manchester United legend Roy Keane can certainly be a bit of an intimidating character, and Barcelona’s Gerard Pique has spoken about an incident that marked his time at Old Trafford in his youth.

The Spanish defender, now with Barcelona, had a brief spell with United as a youngster and clashed with then-captain Keane when his phone went off in the changing room.

In typical Keane style, the Irishman had no qualms about ripping into Pique over the incident, terrifying him to the point that the player admits he ‘almost s**t myself’.

Pique only made a handful of appearances for United’s senior side after joining from Barcelona’s youth team, eventually returning to the Nou Camp in the 2008/09 season.

The 31-year-old is now regarded as one of the finest defenders in the world and has won a host of major honours with Barca, but he still credits that brief time at Old Trafford as an important part of his development.

‘I arrived at Manchester United a boy, and I left a man,’ Pique told the Players’ Tribune.

‘It was a crazy time for me, because I had never been away from home before. I spent my first 17 years growing up in Spain in Barcelona’s youth academy, and it almost felt like I was playing for the local school team or something. I knew everybody there, and I was close to my family. So, to me, football was just fun. I didn’t understand the business side of the game at all. Then I arrived at United, and honestly, it was a complete shock.

‘Sir Alex (Ferguson) was phenomenal to me from the very first day. The best managers all have this quality — even when they’re not playing you, and even when they’re hard on you — they make you believe that they really care about you. Sir Alex was like a second father to me.

‘One of my very first matches at Old Trafford, we were in the dressing room getting ready, and I was nervous as hell. Imagine it — I’m 18 years old, and I’m sitting in that little dressing room putting on my socks next to Ruud Van Nistelrooy and Ryan Giggs and Rio Ferdinand. I wanted to be invisible. I was thinking, Just do your job and go unnoticed.

‘So we’re sitting there waiting for the gaffer to come in and speak to us, and I’m literally sitting right next to Roy Keane. The dressing room is so small that our legs are almost touching. There’s no space at all.

‘It’s dead quiet. All of a sudden, you could hear this little vibration. Very soft.

‘Roy is looking around the room.

‘Oh, shit. I realize it’s me. It’s my cell phone. I left it on vibrate, and it’s in the pocket of my pants, stuffed in the clothes bag that’s hanging right behind Roy’s head.

‘Roy can’t find where the noise is coming from. Now he’s looking around the room like a maniac. His eyes are darting everywhere, and he’s trying to figure it out. You know the famous scene with Jack Nicholson in The Shining, when he bursts through the door? That’s what he looked like.

‘He screams out to everybody, “Whose phone is that?!”

‘He asks a third time. 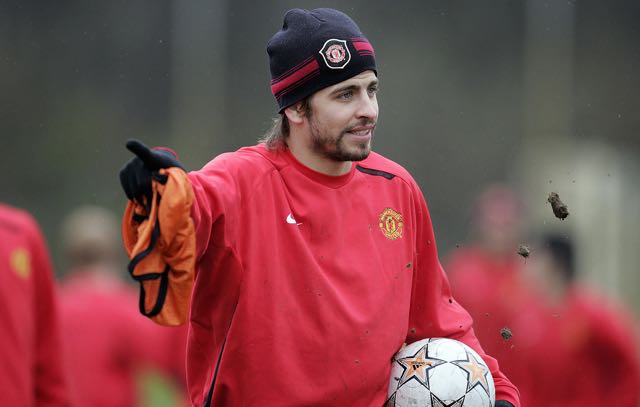 ‘Roy put his arm around me, and he laughed, and he told me not to worry about it.

‘No, come on, of course I’m joking! Roy lost his mind! He went nuts in front of everybody! It was incredible. I almost shit myself. But it was a good lesson.

‘Now, in 2018, everything is different. All these kids are on their iPhones before the matches. But back then, in 2006? It was a different world. You didn’t do that. Especially not at United. Not in Roy’s dressing room. It was one of a thousand mistakes that I made when I was at United.’

No one messes with Roy Keane