Manchester United may have been dealt a blow in their transfer pursuit of Ajax winger Justin Kluivert as his father admits it’s a dream for him to play for Barcelona.

Speaking about his son and his development after a promising start at Ajax, his father Patrick Kluivert, who starred for Barca during the peak of his playing career, said he’d love to see him follow in his footsteps.

Kluivert junior looks like he could be a fine signing for United, especially given their current problems in the attacking midfield department.

Alexis Sanchez has been poor since joining the Red Devils from Arsenal in January, and at the age of 29 may not have long left at the top level given how much his style of play depends upon physical attributes like his pace, strength and work-rate.

Kluivert, 18, looks to have a promising career ahead of him and could offer the ideal solution for United’s woes, and the Daily Mirror recently claimed the club were keen on a swap deal with Ajax involving Daley Blind. 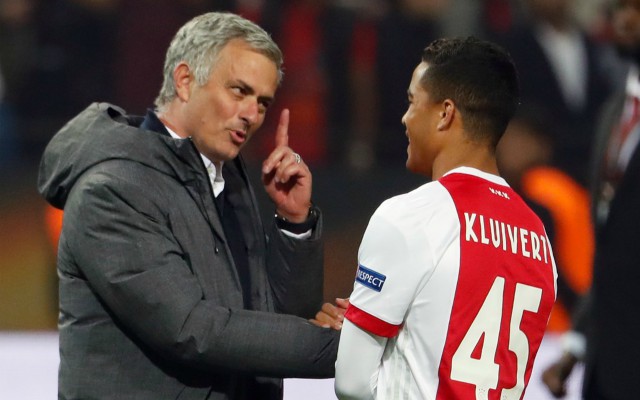 Jose Mourinho has been linked with Justin Kluivert before

A few months back, the Mirror even claimed United were in advanced talks over signing the teenager, so his father’s words suggest he’s keen to persuade his son not to accept their offer.

‘Of course, I prefer that he goes to Barcelona but in football everything can happen,’ Kluivert is quoted in the Metro.

‘He’s an adult, he can make his own decisions but he’s already said it’s a dream for him to play for Barcelona. But you never know in football.’