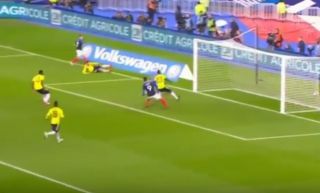 Olivier Giroud has given France the lead against Colombia in their friendly this evening after an awful mistake by his former Arsenal team-mate David Ospina.

The Colombia goalkeeper fumbled a cross right into the path of the Chelsea striker, who duly accepted the invitation to fire home into an empty goal from close range.

MORE: Olivier Giroud admits he hasn’t hit it off with Chelsea team-mate since sealing transfer from Arsenal

Giroud may not have been in the best form for Chelsea recently, but the 31-year-old could hardly miss here after such a gift from the hapless Ospina in the opposition goal.

Petr Cech hasn’t covered himself in glory with the Gunners recently, but it’s performances like this from the club’s backup that surely ensure the Czech ace keeps his number one spot for the time being.

Chelsea fans will hope this goal vs Colombia does Giroud’s confidence some good as he’s yet to make much of an impact at Stamford Bridge since joining from Arsenal in the January transfer window.