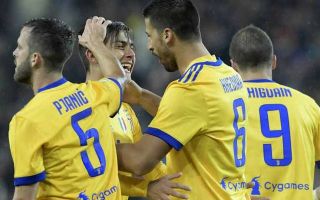 Juventus have some crucial fixtures coming up immediately after the international break, and Real Madrid could be set to benefit from a possible injury setback.

The Turin giants take on AC Milan in Serie A on March 31, before quickly switching their focus to the Champions League as they host Real Madrid in the first leg of their quarter-final tie on April 3.

Massimiliano Allegri already has a headache in midfield as Miralem Pjanic will miss the first meeting due to suspension, as his creativity and ability to dictate the tempo of the game will be sorely missed by the Italian champions.

Now, according to Calciomercato, Allegri could have another key absentee, as it’s reported that Sami Khedira picked up an injury with Germany on international duty on Friday night and so the Juventus midfield could be severely weakened for the clash with Real Madrid.

With the return fixture only a week later, this really isn’t a good time for any injury setbacks, and so while further tests are expected to be carried out to determine the extent of the issue, Allegri will be desperately hoping that he isn’t left without more players to face the Spanish giants.

If Khedira is forced to miss out, that’s a lot of experience and quality not at Juve’s disposal for a pivotal meeting, but with time on their side still, albeit not for the Milan game which is rapidly approaching, they will hope that they can get the German international back to full health and available for selection to face his old club.

From a Real Madrid perspective, while it’s always great to see top clubs at full strength to deliver the best possible spectacle, they’ll surely see any absences on the other side of the pitch as bonuses.