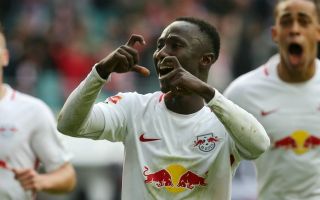 With a deal in place to sign Naby Keita from RB Leipzig this summer, this probably isn’t what Liverpool particularly want to hear about their incoming signing.

As confirmed on the club’s official website, the Reds will welcome the Guinea international to Anfield at the end of the season as he continues to impress on the pitch for the Bundesliga outfit.

SEE MORE: Liverpool rival Arsenal and Chelsea for £106million forward who could be electric alongside Mohamed Salah

The 23-year-old has bagged eight goals and five assists in 31 appearances so far this season, as he continues to have an influential impact for his side.

Coupled with the potential exit of Emre Can this summer as his contract is set to expire, at which point he will become a free agent, it could be a crucial addition for Jurgen Klopp to solidify his midfield options and add extra quality to his group.

However, in less encouraging news. ESPN report that Keita has been fined €250,000 on appeal after he submitted false driving licences to the authorities.

It’s added that although the fine is less than the initial figure demanded in February, which his lawyer was able to reduce, it’s a still a hefty fine that he’ll potentially have to pay out while it’s a red mark against his name.

Naturally, it won’t have any impact on his move to Liverpool, but it’s certainly an unwanted distraction and headache for the midfield ace and one that doesn’t particularly reflect well on him especially with such a big move for his career coming up.