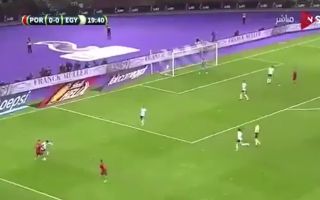 Cristiano Ronaldo produced an outstanding piece of skill which inevitably did not go unnoticed as the Real Madrid star lead a dramatic comeback for Portugal against Egypt.

Cristiano Ronaldo produced a memorable individual performance for Portugal last night as the European Champions produced a late comeback to prevent an upset during Friday night’s set of international friendlies.

Mohamed Salah gave Egypt the lead as the Liverpool winger continued his fine goalscoring form he has produced for Liverpool this season. Salah’s second-half opener means that he has now scored 16 goals in his last 14 games for club and country.

Mohamed Salah has now scored 16 goals in his last 14 games for club & country.

It looked to be the Egyptian magician that had stolen the limelight until that man Cristiano Ronaldo rolled back the years with an outstanding individual performance.

Ronaldo scored twice in extra-time to lead his Portugal side off the pitch with a late 2-1 victory.

Ronaldo’s late brace from last night means that he now sits in third place in the all-time international goalscoring list.

Ronaldo moves up to 3??rd on the all-time international scoring list with his late double vs Egypt. ????pic.twitter.com/1K9vXuMSGo

However, it was not Ronaldo’s goals that stole the attention of football fans from around the world. Rather, it was a piece of subtle skill the Real Madrid star produced in the first-half.

The moment Ronaldo fooled an Egypt defender with a clever back-heel can be seen below.

The skill was heavily reminiscent of the style of football that Ronaldo used to produce during his time at Manchester United under Sir Alex Ferguson. In the last ten years the Portuguese forward has grown to become a stat machine that focusses on scoring consistent and regular goals. However, during his breakthrough years at United Ronaldo was recognised for his tricky footwork and showboating.