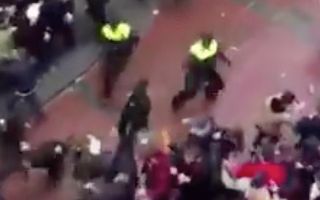 With concerns ahead of the World Cup in Russia this summer, England fans had their trouble with Dutch police in Amsterdam ahead of the friendly against the Netherlands on Friday night.

Following the violent scenes which marred Euro 2016 in France with England fans involved in ugly scenes with Russian rivals and others, the last thing that any concerned want to see is more issues on the eve of the showpiece event this summer.

According to ESPN though, 90 fans were arrested in the Dutch capital due to unrest before the game, while the overall total for the week has exceeded 100.

As seen in the videos below, England fans were involved in clashes with the police, although in their defence, it doesn’t show the whole story as to whether or not the force exerted was entirely necessary in every instance.

Nevertheless, the trouble does seem to follow them around, and it’s just hoped that everyone remains safe in Russia this summer with reports like this one from The Telegraph not instilling a great deal of confidence in terms of safety for travelling supporters.

Based on these videos below, it’s fair to say that the level of behaviour wasn’t great and it may be a problem in a few months time…

Dutch fans attacking a pub full off England fans. Something the media will not be willing to show. (@englandawayscenes) #EnglandAway pic.twitter.com/ogaD5WDwVK

? England fans goading Dutch residents as they walk by…

And we already have an England fan in the canal! #EnglandAway pic.twitter.com/d2Z11h8bBa

Some England fans are an absolute disgrace pic.twitter.com/WAlhvNqvnw