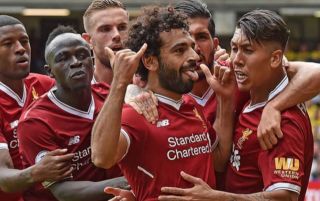 Mohamed Salah has been a revelation this season, and given his impact for Liverpool, they’ll undoubtedly be desperate to see him stay for the foreseeable future.

The 25-year-old has bagged 36 goals in 41 appearances so far this season, building on his impressive form during spells with Fiorentina and Roma and taking it to the next level.

In turn, he has been absolutely crucial to Jurgen Klopp and Liverpool’s pursuit of a top-four finish in the Premier League along with their continued pursuit of Champions League glory, but naturally, with form like that it will always attract attention from elsewhere.

In a major boost for the Reds though, The Mirror claim that Salah could pen a new £200,000-a-week contract to extend his stay at Liverpool as opposed to move to Real Madrid, who are specifically mentioned as being interested in prising the Egyptian international away from Anfield.

Salah undoubtedly deserves an enormous amount of credit for the way in which he has adapted to the Premier League this time round, having struggled during a previous stint with Chelsea.

In complete contrast to that spell, he has fitted in perfectly with Liverpool’s style of play, using his pace, movement and eye for goal to great effect in a front three for Klopp, alongside Roberto Firmino and Sadio Mane.

While that is an attacking trident that could certainly fire them to major honours in the future, it’s no surprise then that the Merseyside giants are reportedly willing to dig deep into their pockets to keep their talisman this season happy financially.

Add to that the possibility of further growth and improvement under Klopp and a chance to win major honours with Liverpool, it all points towards an extended stay even if Real Madrid try to step up their pursuit.