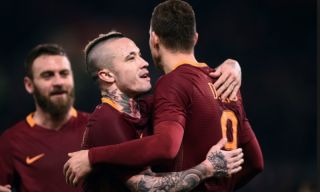 Chelsea are reportedly preparing to make a fresh attempt to sign Roma striker Edin Dzeko this summer after being linked with a January move.

The 32-year-old enjoyed a stunning campaign last year, scoring 39 goals in 51 appearances, with 29 coming in Serie A to ensure he took home the Capocannoniere award for top goalscorer.

Dzeko has been a little less decisive this time round with 17 in 37 games, but he continues to be a prominent figure in the Italian capital and an important source of goals as Eusebio Di Francesco’s side continue to chase a top-four finish and the Champions League.

According to Corriere dello Sport, Chelsea will try again for the Bosnian international this summer after failing to secure a deal in the last transfer window. It’s added that Real Madrid will prioritise Robert Lewandowski, which in turn gives the Blues a straight shot at their top target.

Whether or not they can prise him away is another matter though, as he looks settled in Rome and if the goals keep coming, it will allow him to continue to feature heavily at the highest level heading into the latter stages of his career.

From a Chelsea perspective though, with Alvaro Morata failing to hit the heights expected of him this season, with just 13 goals in 39 appearances in all competitions, coupled with Michy Batshuayi seemingly not being fancied by Antonio Conte after being shipped out on loan to Borussia Dortmund, the Blues could arguably do with more reinforcements in that department.

An argument could be made that Dzeko is similar to January signing Olivier Giroud though given they can both offer a real presence up front and offer a different kind of threat with their aerial ability. In turn, whether it makes sense to have both involved in the squad will require an important decision this summer it seems.