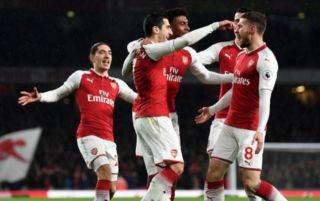 Arsenal reportedly have real cause for concern as both Man Utd and Juventus are keen to snap up midfielder Aaron Ramsey this summer.

The 27-year-old has been a regular for the Gunners since joining the club in 2008, as although he’s struggled with injuries throughout, he’s made 320 appearances in total and won three FA Cups.

In the 2013/14 and 14/15 campaigns, the Welshman was in peak form as he emerged as a real goalscoring threat having reached double figures in both seasons, but since then he has struggled to reach that level and now seemingly faces an uncertain future.

With his current contract set to expire in 2019, there will naturally be fears over his long-term future at the Emirates as Arsenal would be well advised to push on with negotiations over a new deal sooner rather than later if they wish to keep him.

Especially with The Sun reporting that both Man Utd and Juventus are eyeing a £35m move for Ramsey, both clubs potentially see the Welsh international stepping in for others. United hold a fear of seeing Paul Pogba leave, as per the report, while if Juve miss out on Emre Can, it appears as though Ramsey has emerged as the top alternative.

It’s debatable as to whether or not he’s done enough to earn such a move, but there is no denying that he is a quality player and could improve any squad.

With Michael Carrick retiring at the end of the season coupled with doubts over Marouane Fellaini’s future at Man Utd as his contract will expire this summer, the Red Devils may well need reinforcements in that department regardless of Pogba’s future.

As for Juventus, having been linked with a move for Can for months, they’ll be disappointed if they don’t sign him and so Ramsey could be an alternative to offer them a different dynamic in midfield.