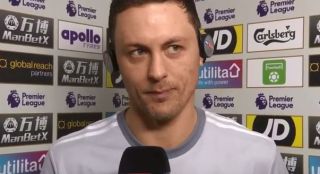 Man Utd midfielder Nemanja Matic has been left to fume with the Serbian media as he hit back on Instagram on Monday over what he claims are lies.

The 29-year-old continues to establish himself as a solid and reliable figure for United, making 41 appearances so far this season as he is undoubtedly regarded very highly by Jose Mourinho.

Aside from the qualities that he brings on the pitch from a football perspective, the Serbian international has posted a string of light-hearted messages on his social media accounts to show a different side to him.

From revealing the note he got from Mourinho during the Chelsea game to introducing us to the ‘Matic Lounge’ at Carrington and sharing images of him and his family.

The stalwart seems like a man who is in full control of his emotions and it will take something significant to annoy him. That may well have happened, as per the post below, as he hit back at the Serbian media over a report regarding Branislav Ivanovic.

“Because of these lies I have decided to never give statements to the Serbian media,” he wrote in his caption.

As noted by Twitter user @DusanMano below, Kurir, as seen in the image above, published an article suggesting that Matic led other senior players in mocking the fact that Ivanovic was stripped of the captaincy with the national team this past week.

So in response to this Kurir article that Mati? lead other Serbian players in laughing at Ivanovi? for being stripped of the captaincy…Mati? has announced he won’t ever give interviews to the Serbian press again… https://t.co/rFReYeZeAq

In response, the midfield maestro has insisted he will no longer speak to the Serbian media, effectively slamming the report as a complete lie as he isn’t impressed one bit.

It remains to be seen if that sticks, but for now, it’s a great response from the United star to what he is calling out as a flat out lie and is holding the media accountable for it.

Serbia will continue their preparations for the World Cup this week, and regardless of who’s captain, they’ll be hoping for a positive result against Nigeria in order to put the off-field distractions to the back of their minds.