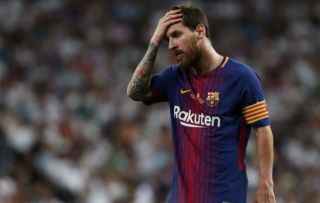 After sitting out Argentina’s win over Italy last week, Barcelona star Lionel Messi will reportedly play no part in their game against Spain on Tuesday night.

The 30-year-old has been struggling with a hamstring injury, and much to the disappointment of an expectant crowd at the Etihad Stadium last Friday, he failed to make it onto the pitch.

According to Mundo Deportivo, he’ll miss the friendly with Spain in Madrid too after not feeling right after training, and although it’s noted that it is a precautionary measure so as to not risk a bigger setback, it will undoubtedly remain a concern for Barcelona moving forward given the important fixtures coming up.

They will of course be relieved that Argentina coach Jorge Sampaoli isn’t expected to take any risks, but with their Champions League tie against Roma, the Copa del Rey final which sees them face Sevilla along with the La Liga title race, the last thing the Catalan giants want to see is Messi remain sidelined.

Further, there is still another El Clasico remaining this season, and so they’ll be desperate to ensure that the injury doesn’t worsen in the coming weeks.

From Messi’s perspective, aside from his crucial upcoming club commitments, he’ll also want to avoid putting his World Cup hopes in jeopardy as the tournament kicks off in June.

All parties concerned will have to be careful given it’s a hamstring issue, and so resting him and taking zero risks is seemingly the most sensible approach.

With an 11-point lead over nearest title rivals Atletico Madrid and with just nine games remaining in the campaign, perhaps Barca coach Ernesto Valverde would be well advised to manage Messi’s minutes in the league and keep him fresh and fully fit for the pivotal games to come.