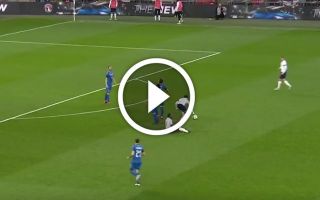 Jesse Lingard was well and truly switched on as his quick free-kick helped England break the deadlock against Italy at Wembley on Tuesday night.

The Azzurri started the game brightly with Ciro Immobile wasting some early openings to give them a lead and silence the home crowd.

Luigi Di Biagio’s men were made to pay for that, as after Raheem Sterling had been brought down, Lingard responded very quickly to take the free-kick and set Jamie Vardy free down the right side.

The Leicester City forward produced a thunderous finish to send his effort flying into the back of the net past Gianluigi Donnarumma, as he continues his impressive streak in an England shirt.

Having bagged goals against Spain, Holland and now Italy, England fans will be hoping that he can deliver when it truly matters at the World Cup in Russia this summer.

GOAL! @vardy7 smashes @England into the lead with a fine finish after quick thinking from @JesseLingard pic.twitter.com/DaM4CZ6Hoe