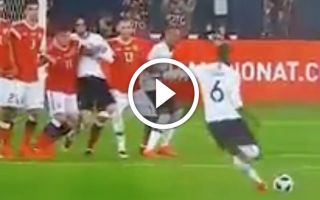 Much has been said about Paul Pogba’s form for Man Utd this season, but the international break could seemingly do him the world of good.

The 25-year-old was in action for France in the international friendly against Russia on Tuesday evening, as Les Bleus continue their preparations for the World Cup this summer.

With Didier Deschamps showing faith in Pogba despite his indifferent form with United, the midfield ace rewarded him with a fine display as he registered a goal and an assist to put France firmly in control either side of half-time.

The Frenchman has bagged three goals and 10 assists in 27 appearances for Man Utd this season, and so evidently he has still managed to have a positive influence at times.

However, he has struggled with confidence it seems when his form has dropped, but scoring this stunning free-kick and producing a wonderful assist for Kylian Mbappe to open the scoring will surely give him a massive boost in the coming weeks.

Man Utd fans will hope that he can build on that when he returns, but much depends on whether or not Jose Mourinho gives him the opportunity to shine and start to impress again.