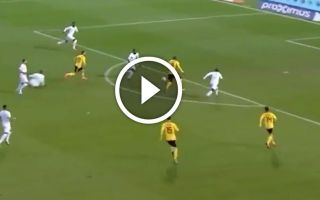 Romelu Lukaku seemingly can’t wait for the World Cup to get started as he was in fine form for Belgium on Tuesday night against Saudi Arabia.

The Man Utd forward had already scored to break the deadlock after just 12 minutes, and he wasted little to find the mark again before half-time.

Having been in great form for the Red Devil this season, he’ll hope that this is a further boost for his confidence to enjoy a strong finish to the campaign before reporting for international duty ahead of the showpiece tournament in Russia this summer.

With finishing like this, he’ll make Roberto Martinez’s job a lot easier, and he’ll be hoping that he can play a fundamental role in getting Belgium into the latter stages and really competing for the biggest trophy of them all.

While it is Saudi Arabia and merely a friendly, goals for a striker will only build his confidence and that’s great news for Man Utd and Belgium.