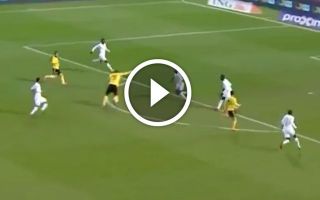 Man Utd fans will certainly be enjoying the international break with their star players in fine form ahead of returning to club duty, including Romelu Lukaku.

Paul Pogba was the first to give himself a boost in confidence as he bagged a goal and an assist in a 3-1 win for France over Russia.

To follow that up, it was over to Lukaku to waste no time in giving Belgium the lead over Saudi Arabia, as it took Roberto Martinez’s men just 12 minutes to find the opening goal of the game.

With the World Cup in Russia this summer fast approaching, Belgium will be hoping to sign off in confident and stylish fashion in their last friendly before the big tournament.

They’ll undoubtedly be looking to Lukaku to lead the line for them, as the 24-year-old has enjoyed an impressive first season at Old Trafford with 25 goals and eight assists in 44 appearances.

With that in mind and this confident and composed finish, he may be a crucial factor in their progress this summer while for United supporters, they’ll be hoping to see more of the same between now and the end of the campaign as they continue to battle for second place in the Premier League and the FA Cup.