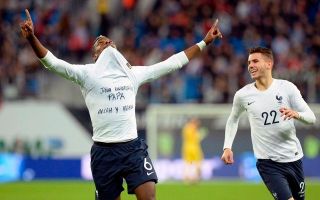 Paul Pogba sent a heartwarming message to his father as he celebrated scoring for France in their win over Russia in a friendly on Tuesday evening.

The 25-year-old was on the mark in the 3-1 win, as after firstly providing an inch-perfect assist for Kylian Mbappe to open the scoring, he added a second himself with a superb free-kick.

It’s been a difficult period for the Frenchman as he has struggled to discover his best form for United in recent times, with question marks being raised over whether or not Jose Mourinho is using him in his most effective role.

Having flourished on the left of a midfield three at Juventus, he has been deployed in a different role back at Old Trafford with more defensive duties.

However, he seemingly relished being back with Les Bleus, With Didier Deschamps continuing to show faith in him, and having that rewarded with a starring role in the victory over Russia.

That in turn will keep Pogba in a strong position to play a leading role for them at the World Cup this summer, but he had a poignant message for his father on Tuesday night as he revealed a message on his shirt under his jersey.

It read: “Bon Anniversaire, Papa. Allah y Rahmou.” That translates as: “Happy birthday, dad. May Allah have mercy on him.”

Pogba’s father sadly passed away last May, and today would have been his 80th birthday. The France international will be hoping to continue to do him proud moving forward.

Pogba’s shirt reads “Happy birthday, dad. May Allah have mercy on him.” He’d be so proud of you @paulpogba, so much more to come, keep it up ?. pic.twitter.com/rd3CO58cys