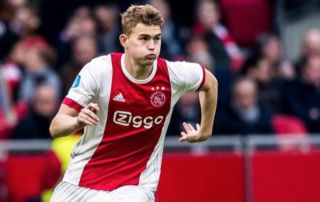 Matthijs de Ligt is attracting headlines across Europe after his dominating performance for Holland against Portugal and Cristiano Ronaldo.

The Dutch won 3-0 in a fantastic display against the European Champions with De Ligt catching the attention with a fantastic defensive display and displaying all the hallmarks of a cultured Dutch player by grabbing two assists too.

Furthermore, he was more impressive in keeping Real Madrid superstar Cristiano Ronaldo, quiet and frustrated throughout the game.

Still only 18 years of age and winning just his fifth cap for his country, De Ligt also helped himself to two assists as Holland ran riot against the Euro 2016 winners.

Who is Matthijs de Ligt?

De Ligt, 18, is a youth product of the famed Ajax academy, and alongside, Justin Kluivert, is regarded as the club’s brightest prospect.

He broke into the team last season and had a fantastic season as Ajax just lost out to Feyenoord in the title race and Manchester United in the Europa League final.

The teenager joined the club at the age of nine, and made his professional debut for Jong Ajax on August 8, 2016, in a Eerste Divisie game against FC Emmen, playing the full game.

On September 21, 2o16, De Ligt made his debut for Ajax’s senior team in a cup game against Willem II where his side won resoundingly 5-0.

De Ligt capped of a memomorable day by scoring after 25 minutes from a corner, making him the 2nd youngest goalscorer ever behind Clarence Seedorf.

He is a cultured ball-playing defender and has five goals for the Ajax senior team so far. Furthermore, he is two-footed also.

At the end of last season, De Ligt was rewarded with an extension to his contract until 2021.

He was also rewarded for his fine performances with a call-up to the Dutch squad where he has made five appearances thus far.

De Ligt made his debut for in a 2–0 defeat to Bulgaria in a World Cup qualifying match, becoming the youngest Holland debutant since Mauk Weber in 1931.