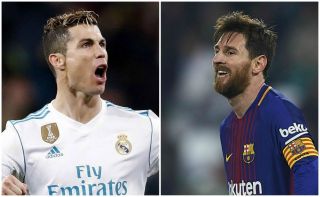 Many fans were left disappointed this past week as Lionel Messi failed to feature for Argentina in friendlies against Italy and Spain.

Multiple reports noted that the 30-year-old wasn’t risked as he is suffering with a hamstring problem, but Barcelona did confirm that he returned to training with the rest of the squad on Thursday, as seen in the tweet below.

? Training for the available players from the first team on the Tito Vilanova pitch. The rest of the internationals have returned, Messi is working with the group and Aleñá of @FCBarcelonaB also joined in. ?? #ForçaBarça pic.twitter.com/fUqOjabv8c

It’s difficult to blame Messi for being absent, as ultimately with the La Liga title race reaching its conclusion, coupled with a Copa del Rey final, the Champions League and the World Cup this summer, the last thing that he wants to do is risk suffering a serious setback.

He’s been in imperious form again this season, scoring 35 goals and providing 16 assists in 43 appearances in all competitions, but that’s a lot of football and it’s at this stage of the campaign where he may risk doing more damage to himself.

According to Don Balon, as re-reported by The Express, both Messi and Barcelona have come up with a plan to avoid such a costly scenario playing out.

It’s claimed that he will be rested for some La Liga games, which is a sensible decision given that the Catalan giants already boast an 11-point lead over their nearest rivals with just nine games to go.

In turn, he will be prioritising the Champions League in particular with Barca taking on Roma in the quarter-finals next month, and then looking further ahead, that will hopefully help him manage his hamstring issue and any other niggles that may crop up in the coming weeks and be ready to feature for Argentina in Russia this summer.

Further, Don Balon suggest that it’s a similar plan to that adopted by Cristiano Ronaldo and Real Madrid. With Los Blancos well off the pace in La Liga anyway it would seemingly make more sense for them to keep the Portuguese international fresh for the Champions League.

Ronaldo will be equally as eager to make a big impression at the World Cup, as he and Portugal will hope to add the biggest prize of all to their European crown that they won two years ago.