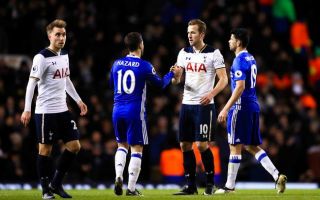 Chelsea host Tottenham at Stamford Bridge on Sunday evening, and the Blues could be rocked by injury news on both sides of the pitch.

Antonio Conte’s side start the game five points adrift of Spurs, who occupy fourth place in the Premier League and so the last qualification spot for the Champions League.

In turn, it will be crucial for Chelsea to get a positive result, ideally a win, to close that gap and give themselves a great chance of catching their rivals and leapfrogging them into the top four before the end of the campaign to secure a seat at Europe’s top table again.

However, it appears as though injury news is going against them, as firstly ESPN report that both Thibaut Courtois and Andreas Christensen are doubtful due to injury.

Both failed to feature over the international break, and so with Conte also confirming that David Luiz is out with a problematic knee issue, it remains to be seen how he plugs the gap in defence and between the posts with Willy Caballero likely to get promoted to the line-up.

Their evening could be made even more difficult with those potential absentees still in mind, as ESPN also note how Mauricio Pochettino hasn’t ruled out the chances of Harry Kane making an incredibly quick comeback from an ankle injury to feature in the showdown.

Tottenham initially stated that the England international wouldn’t be back until April after sustaining ankle ligament damage. Even if Chelsea comes too soon for him, the mere fact that he’s on course to recover and return sooner rather than later will be a massive boost for Spurs.

“He is very positive and he is doing very well,” the Spurs boss told the media. “Every day he is improving. We need to assess him in the next few days. It’s difficult now to say yes or no. I cannot say no, but I cannot say yes.”

The 24-year-old has scored 35 goals in 39 games so far this season, which tells its own story as to how important he is to Pochettino and his men in their bid to end the season in successful fashion.