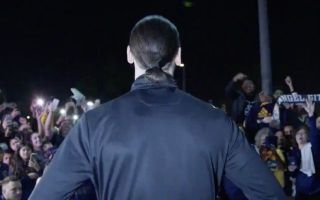 Zlatan Ibrahimovic has touched down in Los Angeles as he prepares for the latest challenge in his career having joined LA Galaxy.

The 36-year-old was given a great reception from supporters to welcome him to his new club, as fans mobbed him as he appeared and signed autographs and took photos with them before making an exit, as seen below.

Following on from successful stints at the likes of AC Milan, Barcelona, Paris Saint-Germain and Manchester United, it will be a different type of challenge for the Swede in MLS, but at this stage of his career and coming off the back of a serious knee injury, he’ll undoubtedly relish it.

It would of been a disappointment for many though to see his time at Old Trafford cut short. With 29 goals in 53 appearances, coupled with winning the Europa League and League Cup, he certainly left his mark.

Having signed big name players in the past though, most notably David Beckham of course, Galaxy will be delighted to have secured the signing of Ibrahimovic.

However, beyond the interest and off-the-pitch benefits of such a signing, both parties will certainly hope that it’s a fruitful relationship on it too that leads to success in the coming months and years.

Ibrahimovic brings a wealth of experience and quality to the table having enjoyed a trophy-laden career all around Europe, but he’ll have to prove that he has recovered from that injury and is in a position to have a positive impact in what could be the final years of his playing career.

For now though, he will have been delighted to get this reception…