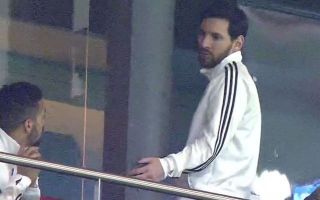 It was a difficult week for Lionel Messi, as he was forced to sit out of friendlies against Italy and Spain due to a hamstring injury.

The week was made worse by the fact that his Argentina teammates fell to a heavy 6-1 defeat without him against Spain, as he could only watch from the stands before being spotted leaving early.

While he’ll be desperate to ensure that he’s fully fit for the World Cup in Russia this summer, aside from his influence from a playing perspective, he reportedly demonstrated his leadership qualities and class with a message for his compatriots after the game this week.

As reported by Diario Ole, the 30-year-old said to them in the dressing room after the game: ‘We come through this together. United.’

La Nación add that he told the players to “lift their heads up”.

In truth, Argentina didn’t particularly impress in either outing over the international break, as although they secured a victory over Italy, it wasn’t an entirely convincing display at the Etihad Stadium in Manchester.

In turn, it will be down to Messi to come back and inspire them this summer when it matters mosts, although the Barcelona star has more immediate concerns to deal with first.

With the La Liga title race, Copa del Rey final and the Champions League still within his sights, he’ll be hoping that a successful club campaign can inspire him to do great things on the biggest stage of all in the World Cup.

Messi has been in stunning form again this season for the Catalan giants, scoring 35 goals and 16 assists in 43 appearances in all competitions.

However, he’ll be desperate to take that form to Russia and lead his side to World Cup glory as they look to put the disappointing Spain result behind them. Rightfully so, Messi insisted that the group must stick together in order to secure improved results.