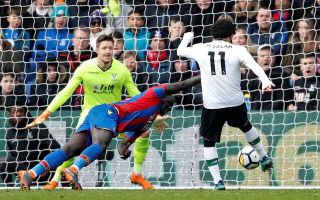 Mohamed Salah’s incredible season shows no sign of slowing down as he bagged the winning-goal for Liverpool in a 2-1 victory over Crystal Palace on Saturday.

It looked bleak for the visitors at Selhurst Park as they fell behind to a Luka Milivojevic penalty after just 13 minutes, but Jurgen Klopp’s half-time team-talk seemingly worked wonders.

It took them just four minutes after the break to find an equaliser through Sadio Mane, before Salah popped up to score his 37th goal of the season in all competitions in the final few minutes of normal time.

From a Palace perspective, it will be a bitterly disappointing defeat as Christian Benteke in particular spurned some great goalscoring opportunities to restore their lead.

Instead, he was left to rue those missed chances, while Liverpool took another big step towards cementing a place in the top four in the Premier League this season and therefore qualifying for the Champions League.

As for Salah though, that’s now 37 goals and 12 assists in 41 appearances in all competitions in his first campaign with the Reds since his summer move from Roma, as he continues to be the decisive factor for the Reds with the pressure really on now at the business end of the campaign.

Judging from the reaction below, the Egyptian international was unsurprisingly a popular figure with supporters.

However, that wasn’t all, as with his goal against Palace, he’s now equalled Cristiano Ronaldo and Robin van Persie’s Premier League record of scoring 21 games in a 38-game season, and of course he still has plenty of time to surpass that.

Further, he has also equalled Didier Drogba’s record for the most goals scored in a single Premier League season by an African player.

Salah is certainly one of the shining lights in the Premier League campaign this year, and Liverpool will hope that it can continue for a few more weeks yet…

Salah has now equalled Didier Drogba for the most goals scored by an African player in a single Premier League season.

BEST PLAYER IN THE WORLD pic.twitter.com/BGO38JVRqM