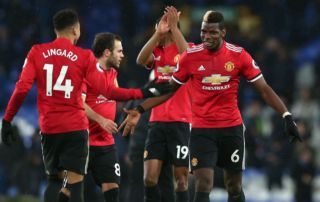 Man United fans were absolutely over the moon with Jesse Lingard’s performance this evening in the Red Devils’ 2-0 win over Swansea at Old Trafford.

The home side took the lead thanks to a fine finish from Romelu Lukaku just four minutes into the match, with Chilean Alexis Sanchez then doubling the home side’s lead in the 20th minute after a fine nutmegged through ball from Lingard himself.

The win now means that the Red Devils have leapfrogged their rivals Liverpool into second place in the Premier League, with them not sitting just 13 points behind local rivals Man City.

During the match, Lingard proved to be one of the standout performers, with the England international being apart of some of the Red Devil’s most promising attacks in the game.

Lingard has been a breakout star this campaign, with the Englishman bagging 13 goals and five assists for Jose Mourinho’s side so far.

Here are a few select tweets from fans praising the midfielder for his display against the Swans this afternoon.

I have to say it! LINGARD was world class for about 2/3rd of the game. Was never nervous on the ball. Later of course we slowed down.

Lingard is a top class player and there’s absolutely nothing you can do about it, end product is immense