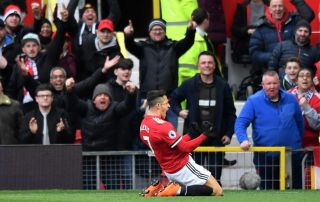 Manchester United strolled to a 2-0 win over Swansea this afternoon as the Red Devils leapfrogged rivals Liverpool in the Premier League table.

Goals from Romelu Lukaku and Alexis Sanchez saw Jose Mourinho’s side secure their 21st league victory of the season as the Red Devils closed the gap on rivals Man City to 13 points.

Here’s a round-up of the Good, the Bad and the Sad from today’s Premier League clash at Old Trafford…

Alexis Sanchez finally proved his worth today, as the former Arsenal forward bagged a goal and an assist to contribute massively to the home side’s 2-0 victory over the Swans today.

The Chilean’s movement for his own goal was sublime, and the finish wasn’t bad either, with his dribbling and vision to set up Lukaku for United’s first goal being a thing of beauty.

Sanchez has struggled somewhat since his January transfer from the Gunners, however today he showed exactly what he’s capable of, as he dragged the Red Devils to victory over a defence-heavy Swansea side.

His tally of a goal and an assist today equalled is the same amount he managed in his last six Premier League games, showing that today maybe just was his day…

The only criticism you could have on United’s performance this afternoon is that they didn’t score more than the two goals that they did.

Despite having 12 efforts on goal, with five of these being on target, the home side were only able to score twice, something some United fans may not be happy about.

United’s failure to find the next on multiple occasions in a game has been somewhat of a flaw for the Red Devils this season, with games against Huddersfield and Stoke standing out as being two fixtures which the Red Devils really should’ve come away with all three points from.

Considering that Mourinho has spent a fair amount on his attack since arriving in Manchester, it’s a mystery as to why the Red Devils can’t seem to score as often and as consistently as their local rivals Manchester City do.

Man United 2-0 Swansea FT. Good performance from United! Could have scored more though! Lukaku and Sanchez with the goals

Michael Carrick was sat on the substitute’s bench for today’s match, and with it being confirmed by the player himself (as per the Metro) that he will be retiring at the end of the season, this may be a sight that Red Devils fans may only see a few more times before the player finally hangs up his boots.

Since he joined the club from Spurs over a decade ago, the England international has been a valiant and reliable servant for the Red Devils these past years, with it being a truly sad sight that the player won’t ever put on a United shirt again after this campaign.

Wonderful to see @carras16 among coaching staff. Wish you all the best. ?#mufc