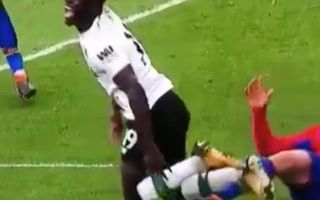 Liverpool forward Sadio Mane was booked in the first half of his side’s clash with Crystal Palace on Saturday, as he was adjudged to have dived in the box.

The Senegal international was arguably the liveliest Reds player on the pitch as he also had a goal ruled out for offside in an entertaining opening 45 minutes, but his good work was undone by this.

Referee Neil Swarbrick appeared to hesitate at first and looked for assistance from one of the other officials, but he stopped play and brandished the yellow card to Mane on a frustrating start to the afternoon for Liverpool.

Palace took the lead from the penalty spot after Loris Karius brought Wilfried Zaha down in the area, and so Jurgen Klopp, who took charge of his 100th Premier League game this weekend, will be desperate for a reaction from his players.

Sadly for Mane though, this isn’t going to reflect well on him, and while there were some Liverpool fans arguing his case and slamming officials for not being consistent given other incidents this season, many others refused to buy the winger’s theatrics and slammed his actions, as seen in the tweets below.

This dive from Mane is outrageous ? could compete at the Olympics with moves like this #CRYLIV pic.twitter.com/jihfPbFywo

Where was you when Mane got shot? pic.twitter.com/VViRiBBa1x

On first glance – nailed on penalty. On second – shocking dive from Sadio Mane.

Sadio Mane with the worst piece of acting since David Beckham in King Arthur. #CRYLIV

He’s not English so therefore this is BAD!

Someone tell me the difference between the contact Mane felt there and the contact Lamela felt at Anfield? Referees are a shambles

If that was Dele Alli or Harry Kane then they get the pen there. But Mané isn’t English so no pen

Saido Mané is booked for diving against Crystal Palace. Where are the Liverpool fans at that were still berating #thfc players for simulation?