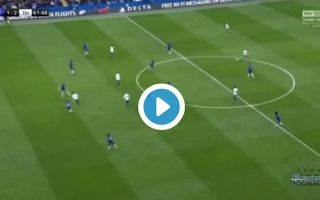 Dele Alli produced a moment of class and magic in equal quantities for Tottenham vs Chelsea to produce a superb brace.

Tottenham fell behind to Chelsea in the first-half after Alvaro Morata gave the Blues the lead on the 30th minute. Huge Lloris came for a Victor Moses cross but fell short allowing the Spaniard to capitalise.

Christian Eriksen however equalised for Tottenham just before half-time from 25-yards with an outrageous effort.

Dele Alli then produced an effort on the 62nd minute which was arguably just as neat as Eriksen’s. A long ball from Eric Dier found his international team-mate who finished after a superb touch. The maturity of the finish from Alli suggests he has listened to recent criticism of his recent form and answered in the best way possible.

Alli was largely snubbed from the starting line-ups during England’s international break last week with Jesse Lingard appearing to have now garnered the trust of Gareth Southgate rather than Alli in the number ten role for England.

On the 66th minute, Alli added a second just four minutes after hist first when Chelsea were unable to clear the ball with the England star capitalising on poor defending from the Blues to put Tottenham 3-1 ahead.

Watch the moment Alli scored his superb first below.

They dared to question if the kid shows up in big games, he is at it again!#THFC #COYSpic.twitter.com/MSbY29b2ut